The trailer of Kuttey, starring Arjun Kapoor as one of the main leads released earlier this week. The action, black comedy co-stars Tabu, Konkona Sen, Naseeruddin Shah, Kumud Mishra, Radhika Madan and Shardul Bhardwaj. The trailer garnered a lot of interest on social media and got fans excited.

Recently, Arjun Kapoor took to his IG handle to share a teaser of the first song of the dark thriller called Awaara Dogs and revealed that it is going to release today. The slick song features Arjun and Tabu wearing black ensembles and posing with some guns. 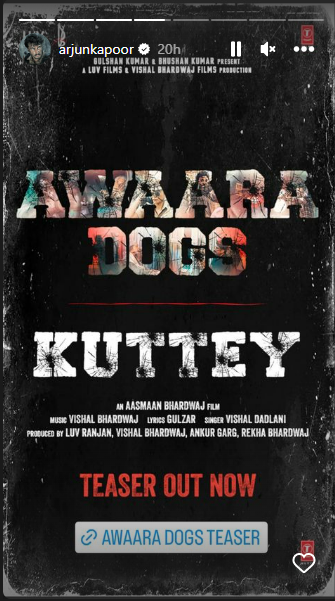 Earlier, actor Janhvi Kapoor, who is Arjun’s half-sister took to her IG stories to share a teaser of the movie and wrote, “How sick does this look!!! I am so stoked and I cannot wait. Too excited. Looks sick.” Sharing another poster, the Mili actor also wrote, “This trailer looks wild. Solid stuff.” Others like Malaika Arora and Katrina Kaif too reshared the same, saying that it looks like a fantastic watch.

Kuttey will mark the directorial debut of filmmaker Vishal Bhardwaj’s son Aasmaan Bhardwaj. The movie will see Arjun Kapoor and Tabu in the role of cops, chasing a group of goons, who are plotting to take off with a van full of cash. The film will hit theatres on January 13 next year.